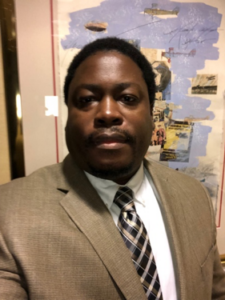 Raised in Philadelphia, Pennsylvania, Storm Yohance’ Camara is the fifth of six children. He was educated in the Philadelphia Public School system, attending the well-known Julia Reynolds Masterman Demonstration School. Storm joined the U.S. Army in February, 1990 at age 17, enlisting as a Medical specialist. After being promoted to the rank of Specialist, Storm was trained as a Flight Medic at Ft. Bragg, NC. During his duty in Fayetteville, NC he attended and graduated with his first degree from Fayetteville State in Liberal Arts-Communications. He was transferred to several posts over the next few years, including the 121st Hospital Unit in Korea, 25th Infantry Division in Hawaii, and HHC Medical Detachment at Ft. Drum, New York. He was honorably discharged in October, 1997.

After working in Corrections as a Correctional Officer from 1998-2000, Storm attended Community College of Philadelphia in 2000. In May of 2002, he received an Associate’s Degree in Education. Combining credits from his previous degrees, he earned a Baccalaureate in Communications from Cheyney University in 2003. He continued his education in graduate school at Cheyney University, completing dual Master’s degrees In Educational Administration (M.Ed.) and Adult and Continuing Education (M.S.) in May of 2004.

In 2003, he began teaching in Philadelphia, PA. Throughout the 10 ten years that followed, he taught as an Elementary School teacher and as an English/Theatre teacher at various schools in the School District of Philadelphia. In 2014, he was selected to become a School Principal for the Commonwealth of Pennsylvania. Storm currently holds the position of State Coordinator at the Pennsylvania Department of Education, and has lead the Education for Children and Youth Experiencing Homelessness program since 2016.